"Do not fret because of evildoers or be envious of the wicked, for the evildoer has no future hope, and the lamp of the wicked will be snuffed out."(Prov. 24:19-20 NIV) 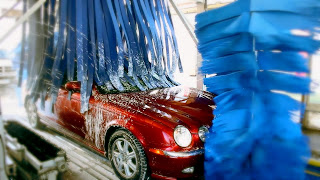 I was listening to Logansport's best radio station - my gal SAL. Lots of old 1940's through 1970's music. One of the all-time greats came on by Rose Royce. Can you guess it? "Workin' at the Car Wash." Right up there with Beethoven and Barry Manilo. Flash from the past. I remember seeing them on "Sou........l Train" with Don Cornelius. It's okay. You can admit it or confess it. You're trying to get that falsetto voice to do the "Sou...l" sound aren't you? Yea...I can't do it either.

It reminded me of the first time our youngest daughter went through a car wash. Strapped into her child protection seat, also known as "the chair," with no escape, she watched as I put my dollars in the machine, put the car in neutral, and waited for the unknown. I could see her through the rearview mirror. No expression until the roller caught the front wheel and we entered into hell itself.

What started out being fun turned into panic as I saw her eyes widen, the lip started to quiver, tears began to well up, and her little arms grasped "the chair."

I quickly turned and said, "It's okay. It's just washing the dirt off of the car." Sometimes we need to see things through a child's eyes.

Often, I'll go through a car wash and turn to Deb and say, "I bet this is pretty scary for a kid." Within seconds, not being able to see because of the spray. Then giant octopus like arms slapping at the windows and every other part of the car. Moving but not knowing where we are going. Something begins to spray from the front. You can hear it coming over the top of you but because you are incarcerated, you can't see if it is coming behind you. And... it does...over the top again. Then the giant sound begins. You're not sure what it is but it begins blowing so hard that the windshield wipers lift off of the glass and....it's coming backward toward you! You...restrained in "the chair" with no way of escape. (Wow! I think I pee'd myself a little just recounting it). And then, as quickly as it started, it was over. The beast puked us out. The trauma will last a lifetime.

I often feel like this little child. Fretting because of the unknown. Nervous about what I see around me. Being pulled into something where I had no choice or input. But the Lord reminded me this week that I shouldn't fret because of the wickedness of the world around me. The evildoer has no hope. But I do.

This stress is not new to me or humanity. It is the purification process, the cleansing process. A reminder that God needs to remove the worldly filth in my life in order to be a useable vessel in his hands. It is about trusting the Father and hearing the words, "It's okay. It's just washing the dirt off."

I never thought of myself this way, but I think I'm working at the car wash.