"His winnowing fork is in his hand to clear his threshing floor and to gather the wheat into his barn, but he will burn up the chaff with unquenchable fire." (Luke 3:17) 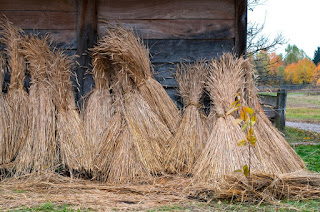 A combine is an engineering marvel. The head pulls the corn into a rolling set of knives that both cuts and pulls the corn stalks in, pulls the stalk down to separate the ear from the stalk, and cast it into the auger throat where it goes into a conveyer system. From there the ear is slightly crushed in the interior drum to release the corn seed from the cob and the dried husk. It then drops down to a shaking separator where the corn (kernels) drop down into an auger through a sieve that takes it up to the hopper and the shaker at the back of the combine shakes everything else backward onto a spinning devise that scatters it upon the ground. Perhaps too much information for those who don't care where your Corn Flakes originally start out but interesting none-the-less.

My grandfather used to have...and every once in a while would show me how an old harvest wagon worked. It had one side with a much higher wall and a drop down gate in the back. When he was a kid they used to do the picking all by hand. Ole Betsy used to pull the wagon very slowly and the men with husking gloves went beside her and picked the corn by hand throwing it into the wagon (hence the higher side of the wagon). Perhaps now you'll appreciate the engineering side of things. If we had to do that now, your Corn Flakes would cost you about $1000 per box.

The wheat harvest was much the same. For many years I still had an old three to four foot hand scythe used for cutting wheat, oats, and even alfalfa grass. Long rhythmic strokes cutting down the crop. With wheat, family members would carefully gather the individual stems up and bundle them up into sheaves. "Bringing in the sheaves (not sheets), bringing in the sheaves. We will come rejoicing bringing in the sheaves." You won't hear that song on the top ten Christian radio plays. (I know some of you are looking this up on You Tube and saying, "Thank God.") The public's loss. An old gospel song written in 1875 by Knowles Shaw based on Psalm 126:6, "Those who go out weeping, carrying seed to sow, will return with songs of joy, carrying sheaves with them."

Deb and I used to see those bound sheaves as we drove through the Amish country of Pennsylvania on our way back to Indiana. There is something about the old way. Horse and buggy. Homemade foods. Homemade clothes. Bowl haircuts. Second thoughts...no thanks. I'm too used to my heated seats and getting to LaPorte in less than a week.

When the farmer brought the sheaves back to the barn (the granary) he would cover them up in a blanket and gently beat the stalk until the heads were separated or he would cast the wheat and straw (stalk) multiple times into the air with his winnowing fork while someone fanned air toward the door. Thus removing the seed from the stem without cracking it and separating the chaff from the seed by blowing it out the door.

John the Baptist told his audience that this is what Jesus is going to eventually do. And interesting to me, is that he said it at the very beginning of Jesus' ministry. Jesus is both Savior and Judge. Separate the wheat from the chaff. Separate believers from unbelievers. His winnowing fork is in his hand. The separation devise is already in his possession. He's ready to bring the good into the kingdom and judge others with the judgment of unquenchable fire.

It scares me to think of the many people sitting in their homes on a Sunday morning without the slightest understanding of what is to come. I think about my neighbor, Ron, who knows all things neighbory. He's a good man but not sure where he stands in his faith or where it may be placed. You see, we all have faith in something. Your eternal destination depends on where it is placed. I'm praying that I might be able to have an open door to ask him some day.

"Lord, Lord did we not prophesy in your name, and in your name drive out demons and perform many miracles? Then I will tell them plainly, 'I never knew you. Away from me you evil doers!'" (Mat. 7:22-23)

The Harvest winds are blowing. The winnowing fork is in hand. Wheat or weed? Worthless stem or good seed?

Perhaps the next time you're out for a country drive you might give thanks for the spirit of invention and take some personal inventory regarding your seed.

"All that call upon the name of the Lord shall be sheaved." 😇💛