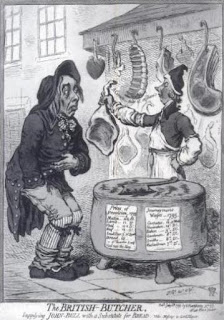 November. From Old French, Novembre. Directly from the Latin, November or Novembris. Novem meaning, "nine." Ninth month with the Roman calendar beginning in March. But not being French or Roman of heritage I decided to look at my mother tongue, Old English, (I am a Saxon on the Cains/Davis maternal side; there may be evidence that I am a distant relative to King Richard, the Lionheart...or castle slave or something...it doesn't really matter). I landed upon something quite interesting.

The month of November in English is called, "Blotmonath." Of course it is! You can see November clearly in the word. If you take the "Bl" out and replace it with an "N," remove the "t" and add a "ve," and cut out the "nath," replacing it with a "ber," - there you have it. "November." The miraculous development of the English language.

"Blotmonath" is a combination of two words, "Blot" meaning, "Blood," and "monath" meaning, "month." It was also called, "The Month of Sacrifice." It was the time of year when most of the butchering was done heading into the winter months. It was cold enough that the meat could drain out the blood while not being prone to natural decay before the salt could be applied.

There are those who believe that this was part of some post-All Hallows Eve pagan god worship that originally included human sacrifice. It may have been, but even non-Christian historians noted that it was primarily domestic livestock. Pagan worship accompanied all aspect of life, so it is no surprise that prayers to the "gods" to get them through a long English winter would accompany the practical action.

I find it interesting and a bit reflective that as we head into Thanksgiving and the miracle of the Incarnation - where God so love us that He became one of us - that in this season "blood," "sacrifice" and "sustenance" through a cold season of life would be the focus of the average person. God does not leave himself without a witness - a reminder.

As a side note, in the early days of America (of which many migrated from England), they used every part of the animal. Brains, tongue, tail, bone marrow, intestines, and fat were all used.

Deb has been trying to think of something unique for our Thanksgiving family dinner. I think we may have found a winner.

And so is my annual cholesterol blood work.

"The fat belongs to the LORD."