13 Bear with each other and forgive one another if any of you has a grievance against someone. Forgive as the Lord forgave you. (Col. 3:13 NIV) 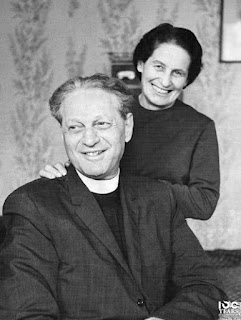 It's getting to that point in the year when all the shows you love to watch are ending or being cancelled. So, it was a surprise when Deb and I were finishing a particular show, beginning to scroll, but stopped as a new movie was about to start. "Sabina - Tortured for Christ: the Nazi years." [You can find it on-line for free].

This was the story of Sabina Wurmbrand. Her husband, Richard, was a former Jewish atheist turned Lutheran follower/pastor of Christ during the Nazi invasion of Romania and then under the communist dictatorship of Ceausescu. They both established what is now known as The Voice of the Martyrs. Richard would spend over seventeen years in prison, being tortured, being humiliated, for one reason: being a follower of Jesus. But Sabina would have her own story.

Maybe it's the human spirit to survive. Maybe it's the constant amazement of man's inhumanity toward man. Maybe it's the wonder of how some people turn toward God in terrible times while others cast him aside. Whatever it is, I am drawn to such stories.

The subtitle of the movie is "The Heart of the Gospel is Forgiveness." I won't go into all the details in case you would like to watch it on your own, but it provoked me to think about my own willingness to forgive.

It's a normal response for me. One: Oh God, please don't let that happen to me. Two: Oh God, if it does, please let me respond in such a Christ-like way.

At the conclusion of the movie Deb said to me, "Do you think you could do that?" My response was, "I hope that I would."

When I think about Sabina's ordeal, although slightly different, I am reminded of Daniel in the Bible. He was captured and taken into exile, brought into the elite group to learn the language, the culture, the plan. But he never lost who he was even through persecution.

So, I think, "I hope that I would" reflects and inner desire to be prepared, to do the hard work now of being like Jesus, of responding in tumultuous times like he responded.

I think, "I hope that I would" realizes that true Christ-like character does not show up on a written quiz. It's not a school exam, pass or fail. In fact, you may never know if you've understood what it means to follow Jesus until you have to put it into practice.

A dear friend of mine, teaching on faith, said, "Dan, faith is just a noun, a word, until it is tested; then it becomes a verb.

You'll never know if you are a true follower of Jesus until you are severely tested. Until then, we prepare and when asked if we could forgive our enemy, our torturers, we respond, "I hope that I would."

"Father, forgive them for they know not what they are doing?"