24 "Sovereign LORD, you have begun to show to your servant your greatness and your strong hand. For what god is there in heaven or on earth who can do the deeds and mighty works you do? 25 Let me go over and see the good land beyond the Jordan-- that fine hill country and Lebanon." 26 But because of you the LORD was angry with me... (Deut. 3:24-26 NIV) 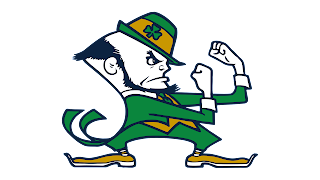 Sunday. 7:10. I couldn't wait for tip off time. My "Fighting Irish" were tapped to play Texas Tech. They had to play an extra game because of their pre-tournament record but that was okay. It would once again show the world their tenacity.

I stepped out in faith asking for prayer for "God's team" to win and it almost looked like they were going to do so. Three minutes to go. ND up by 4. "Just hold on guys...just hold on." A bad call on the referee's part that took away a legitimate basket and about three or four "superstar" dribbles from a freshman point guard with the number "0" - aptly numbered - that ended in three or four turnovers - led to a final defeat.

I will humbly hang my head before the remaining Purdue supporters in my men's bible study, and publicly confess my sin of presumption. Notre Dame has "goal post Jesus" for goodness sake! How could they not go all the way and take the national championship?

But alas...we have come to the biblical dilemma of answered prayer and the will of God. Why does God answer certain prayers and not others? From a finite creature's perspective, it is quite perplexing. God is supposed to give us the desires of our heart, right? Not quite. If I am walking with God, he changes my desires so that they are His. Sometimes my motives are wrong. Sometimes God has other things He is doing that I am totally unaware of. Sometimes my sin clouds my eyes and stuffs up my ears so that I cannot hear. I presume. An answered prayer. A miracle.

Moses desired to go into the Promised Land. God said, "no." He and Aaron had robbed God of his glory by smacking a rock instead of just speaking to it. The result was the same: water came out for the people to drink. But the ramifications for Moses and Aaron were dire. Neither would experience what they had so desperately longed for, prayed for: the Promised Land.

When I was reading Deuteronomy this morning, I couldn't help but see that Moses, in his recounting of that event, had not repented of this sin. He still blamed the people. "Because of YOU the Lord was angry with ME." Classic blame shifting.

Moses should have changed his heart and mind toward God and those he was to serve. Glory restored. Blame accepted. Victory acquired? Prayer answered? Lesson learned?

Still workin' out that lesson 😏