"God will stretch out over Edom the measuring line of chaos and the plumb line of desolation." (Isa. 34:11 NIV) 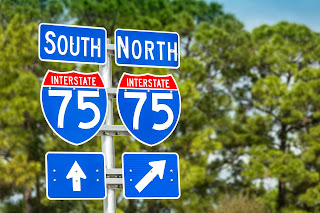 Covid 20/21 put a kibosh on any real travel plans for the Lute's. We were just glad to be home in Indiana, close to family. Holidays, cheerleading, basketball, softball, gymnastics, monthly meals at our home. Nice. Grateful. Close enough. Far enough.
But this year Deb and I decided that we needed to once again venture out. I suggested Saudi Arabia as I have been repeatedly invited by a friend who lives there and ministers to Syrian refugees. We talked it over and agreed that we would go to Florida. My mother was to turn 80 and Deb's parents were down in the Orange Lake area - a two-fer. "Saudi Arabia would always be there, but your mother only turns 80 once." That's what Deb told me. She's so wise. Maybe next year.

We heard the nightmares. Flights being canceled last minute. No rental cars available. No peanuts midflight. Needing to wrap your face in a turban to avoid whatever round of Covid we are in. Flight attendants with tasers. Dogs trained to smell out the unvaccinated. We would normally fly but we chose to see the beauty of the United States of America via ground packaging instead. After all gas was at $3.85. 😎

It's amazing how one has an excited energy leaving the driveway but an hour later you're thinking: "I should have flown." Four hours later your thinking: "I would have been there by now." Six hours later your thinking: "You're a blasted idiot!" Eight hours later and you're looking for that next Cracker Barrel and your hotel exit as your body aches from sitting for what seemed like nine hours. (That's because it was!) Which, by the way, has been the extent of our view of the United States of America through the windshield on any interstate. Rest stops. Gas. Cracker Barrels. Lodging. If I could make this easier for the reader: Pee. Pee. Pee. And..pee.

Atlanta. 9:30 a.m. Great timing. Still Atlanta at 9:30 but no worse than Chicago or Philly or Logansport at that time of day.

"Oh...there's a big church." Deb shakes her head in unbelief that through all the stressful lane changes I seem to lock eyes on a church with my peripheral vision. "Only you, Dan. Only you..." I think it was God's gentle reminder for me to pray. He knew what was coming my way.

The return trip was worse. I-75 at 7 a.m. Cell-phone driving idiots at 55 only because the torrential rain was coming down so hard you couldn't see. Where is I-10. "Sweet home, Alabama." Thank God we decided to go left. That one-hour delay would have put us into Atlanta at 4 on a Friday afternoon.

Made it safely to Cullman, Alabama just north of Birmingham. What is that strip coming across the telee? "Winter storm advisory....high winds...ice...snow..." No. Yes. You've got to be kidding me. "Now, breakfast is from 6 - 9. Check out is at 11." Perspective.

Thankful to go by all the vehicles in the ditches and guardrails. Especially over all of those water overpasses. Glad to make it home safely and to be equipped as a youngin' to drive in that type of weather. Others. Oblivious. "Look at how pretty the shiny road looks."

Limited chaos. It would be easy to complain but my heart has been heavy regarding my brothers and sisters in the Ukraine, in Belarus, in Crimea, in China, and in Saudi Arabia where 80 people were just publicly executed today. I'm guessing you didn't get that on the morning news.

Imagine living life, going about your routines and then suddenly being thrown into utter uncontrollable chaos.

Ukraine. Imagine no home. No idea where you will live...without your husband...without your father and brothers. Limited food. Limited toiletries. A traffic jam in the midst of a torrential downpour...I-75 every day but far worse. Watching life as you know it be destroyed. Chaos. Desolation. I just can't imagine. May God have mercy.

I know that Jesus said there will be wars and rumors of wars until the end, but it feels like were there. May God have mercy.