Look at the birds of the air; they do not sow or reap or store away in barns, and yet your heavenly Father feeds them. Are you not much more valuable than they?" (Matt. 6:25-26 NIV) 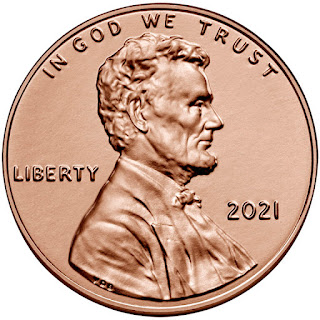 "Value." Definition: "The worth of something"...to someone. I love wrestling with word definitions like this. The value of something is not found in its worth intrinsically (of itself) but extrinsically (outwardly).

During the reign of King Solomon, silver and gold were as common as road stones (1 Chronicles 1:14). Fragrant spices were of more demand - more value.

I had two value moments this past week. The first was on my daily morning walk. Traveling at almost the speed of light my eagle eye caught something shiny in the middle of the street. A treasure. Why has no one else seen this? Why has no one else picked this up and claimed it for themselves? A new penny. As I say to my bride, "One cent closer to our Hawaii trip." Now if I could only find a Buffalo Nickel and a J. F. K. half dollar my summer would be complete.

Perhaps I grew up in a time where even pennies had value, a time where you didn't waste food, where you wore out your clothes and then patched them. Does anyone else remember going down to the local grocery store and buying, "penny candy"?

Do pennies have value? If nothing more than to put them on the railroad track and smash them (which I found out later was a felony crime - I was in hiding until Junior High from the Treasury department).

I still have some of my penny collection books. Part of my massive inheritance that will be left to my daughters. Fifty or so coins that have an estimated value of around fifty or so cents. But it is the thought that counts. I won't even mention my stamp collection that is in some cigar box that my grandpa gave me.

My second moment was on a bike trail with my granddaughter this past weekend. She was telling me about her latest read, "Charlotte's Web." She's ten.

She told me the whole story. I asked questions. "What did the spider spell out in her web?" "Why did she do that?"

"To save the pig, grandpa. But then she dies in the end after she lays her eggs."

"So what do you think was the point of the story?" I asked.

I could tell that she had never been asked the question before. Parroting facts is the standard pedagogy at present. Not much thought goes into "why" something was written. What's the point?

"I don't know, grandpa." "It's really hard to communicate." "I think it's about the value of friendship."

A penny and a story.

A penny and a conversation with a young girl about things that matter.

By the way...there's still a coin shortage. My penny is up to $100 (Biden inflation adjustment = I owe the government $5).

By the way...there's a conversation shortage.