"At that time many will turn away from the faith and will betray and hate each other." (Mt. 24:10)

"Because of the increase in wickedness, the love of most will grow cold, but he who stands firm until the end will be saved." (Mt. 24:12-13) 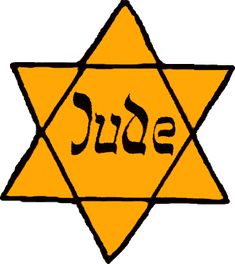 Reinhard Heydrich. Who? Not a household name. But if you're Jewish, it might be. Reinhard Heydrich was Adolf Hitler's head of the Reich Main Security Office. With the SS (Hitler's security force), Reinhard and Heinrich Himmler were tasked with "taking care of" any enemies inside and outside of Germany's borders.

Early on, Heydrich had proposed having a visible sign that identified threats to the Fatherland. It would entail an armband or perhaps a badge worn on the clothing. Hitler, at first, rejected the idea believing that it would cause an adverse reaction from other countries he was trying to coerce. But on September 1st, 1940, per the Nuremberg Race Laws of 1935, the Jewish Yellow Badge was implemented. A badge of ostracism. A badge of segregation. A badge of control. A badge of selected extermination. One month later the extermination camps were opened. The yellow sun fighting against the black spider.

Spanish-American philosopher, George Santayana, wrote (30+ years earlier), "Those who cannot remember the past are destined to repeat it." I guess we have had a lapse of memory.

In my 58 years of life, I have never felt like I was on the verge of being singled out by my government as an enemy of the state like I do now. You see - I am a non-vaccer. I am not only not vaccinated but I don't plan on being vaccinated.

It doesn't matter that I have had Covid and am probably more protected than those who have taken the shots. It's not about my health. It's about forced conformity that goes against my convictions. I just read where the present administration is considering sending health department officials door to door to "persuade" me. I will be researched and ready for a convincing rebuttal.

I don't care one way or the other if you get the shots. If it keeps people who are at high risk from dying - I say, "Amen. Thank you, Lord." If you are not at high risk and just feel more at peace through the vaccine I say, "Amen. Thank you, Lord." I just want the freedom to make that decision without guilt and coercion, especially from my government. It is unconstitutional. Simply said.

But here is what concerns me more. I know of churches out West who are refusing to admit anyone into their worship who is not vaccinated. You have to show them your "card." Really. I say, "Good." Go find a church where Jesus is actually worshipped and where the Holy Spirit is moving.

A Washington State Senator showed up for a vaccine mandate discussion wearing a yellow star on his left chest - the same place where the Nazis demanded the Jews wear their symbol. He was, of course, chastised and humiliated.

Within thirty days people - good neighbors at one time, beloved coworkers and fellow businessmen - were turning people over to the secret police to be arrested and murdered. This is still a very common anti-Semitic accusation and action today in many places around the world.

I am afraid we are already there.

Many pastors and parishioners in Ireland and England did not run away or shy away from those who were dying of cholera and dysentery during the 1832 outbreak. They stayed. They prayed. They loved. They cooked. They buried the dead. They decided that nothing but the love of Jesus for each other will do. Even when they began to succumb themselves - they served.

I think about that type of attitude at times like these. Something selfless. Something noble. Non-accusative. Navigating the haves and have nots, the sick and the well, the vaccinated and non-vaccinated. Not distracted. Not deterred. Loving as Jesus loves. Standing firm until the end.

Let this be my badge.