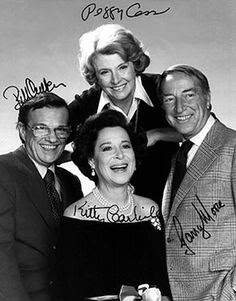 I wasn't around during the premier or Bud Collier as the host, but I was old enough to remember Gary Moore and of course, the lovely Miss Kitty Carlisle, and Peggy Cass. I'm talking about the old black and white, "To Tell the Truth" which began airing on CBS on December 18th, 1956. The Original title was "Nothing But the Truth" but was changed on the day it was to air on prime time.

The premise of the show was to have a panel of four celebrities who would ask probing questions of three other individuals, two of whom were imposters. For example, Sir Edmond Hillary was on the show as the first man to climb Mt. Everest. The other two men were imposters. Questions were asked until the time was up and the celebrities had to guess which person was, indeed, the true Sir Edmond Hillary. Fun but revealing about humanity. We lie very well, especially for $250 (a lot of cash in the 1950s). And...it is often difficult to know what is true.

I'd like to say that this is something new to my world but I think its been a spiritual sickness from the beginning (Gen. 3). Jesus said in John 8 that Satan was a liar from the very beginning and the Father of lies. And of course I am reminded of the Post-modern answer of Pilate when confronted with the truth of Jesus: "What is truth?" It's not that truth was hidden. It just didn't matter. There was an agenda. Death to the Truth.

Joseph Goebbels, Adolf Hitler's Minister of Propaganda, was famous for saying, "If you tell a lie big enough and keep repeating it, people will eventually come to believe it." The Holocaust never happened. "Work makes you free." (Encouraging words of hope at the entrance to Auschwitz concentration camp). It really isn't a person. Fresh air is bad for you. Wear a mask. Get a vaccine. It's free. It's just a mark. Stay in your house isolated from others. They're just peaceful protesters. Trust us. Believe us.

Truth doesn't really matter. It's what you need people to believe to accomplish your goals, your truth of what the world should look like. Welcome to the Great Reset. "It's for your own good", say the antichrists.

I know I'm a bit cynical but I think I'm a realist. We live in a world of lies and half-truths. Its only going to get worse. But it also means that true Christians will have something that no other group will have - true truth.

Deb has Philippians 4:8 on the wall of our bathroom. A list of how God wants me to think. Every time I enter I am confronted with an impossibility it seems. The very first phrase is, "Whatever is true" or in some translations, "trustworthy."

I struggle with that word. How do I even know what is true anymore? Politics. Environmentalists ("An Inconvenient Truth").The medical community. The financial investors. The media. Dare I say it...certain members of the religious community. A smattering of truth, a smattering of lies...like being a little pregnant.

You will be frustrated and hopeless if you try and find it in these places. So where?

Jesus said, "I am the truth." I am a Greek language guy. The word "the" is a definite article that determines the noun. Jesus is not "a truth." He is THE truth. He embodies truth. The writer of Hebrews said, "God, who does not lie.." So if I want to find truth I need to look at Jesus, look to Jesus, look for Jesus. Read the Gospels. Oh..."we have seen his glory, the glory of the One and Only who came from the Father, full of grace and...truth." (John 1:14)

Jesus also told us in John 17 "Thy Word is Truth." I can believe the Bible and don't give me that German higher criticism bunk or those Jesus Seminar guys who sat around in a room and said, "Did Jesus really say this? We don't think so." Brilliant Idiots or in the words of the Globalists, "Useful Idiots." All speculative. All designed to deconstruct the truth and reconstruct a lie - Jesus in their own image. The true Truth is dangerous.

"Whatever is true..." or as Jesus said in his native tongue of the King James English, "Truly, truly, I say to you..."

Never have I found such comforting words.