"The Word became flesh and made his dwelling among us. We have seen his glory, the glory of the One and Only, who came from the Father, full of grace and truth." 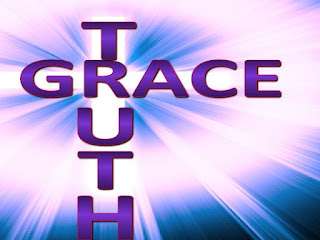 I don't know why I was thinking about this particular image at this time of year, but it wouldn't leave me. In fact, I dreamt of seeing this. You don't see many crosses or cruciforms during the Advent season. Mangers, stars, wreaths, candles, trees...sights of the season but not a cross. That comes in the spring, right? Not really, but we tend to save it out for the Good Friday event.

Jesus' very name carries a cross. Yeshua. Joshua. "For he shall save his people from their sins." God saves. It's part of the Christmas story.

But I was drawn past the usually "tabernacled with us" and the "One and Only" to those two simple words at the end: full of "grace" and "truth."

I've heard it said that if you have truth without grace, you have legalism and if you have grace without truth, you have lawlessness or the old King James word, licentiousness.

It's why Jesus embodied both. He was full of grace and truth.

To them both Jesus says, "Go and sin no more."

As the farmer posted out by the road in regard to a fly-by-night cheap paint company: "Repaint! Repaint! And thin no more."

Remember that Jesus came into this world full of grace and truth. What a gift!

Have a blessed Christmas.

P.S. Taking a couple of weeks to recover from the joy of the holiday season. See you back here in January.