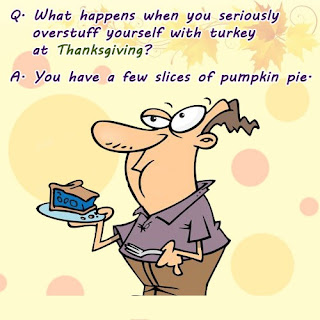 It's Thanksgiving late afternoon. The adults are looking like bloated beached sea lions sunning themselves on a California beach. Shirts that were neatly tucked in are now perceptively pulled out concealing the fact that the pants have been unbuttoned to alleviate the gluttony of food consumed at lunch. The second football game of the day has concluded and a rerun of Harry Potter has been turned on. And one of the grandchildren who ate a Hawaiian sweet roll and a piece of cheese for lunch has the audacity to ask, "Grandma, what's for supper?" OMG! Who can eat again? Apparently, everyone. Grandma throws in a few pizzas and the rest dig into the leftovers.

I don't know about anyone else, but I often find that leftovers taste better than the original. I'm not sure why. I'm heading into day six and I've not complained that the almost week-old gravy has turned lumpy and thick. That's what microwaves are for. I've not reached my limit on turkey breast and spiral ham.

But as we look to invite some people over for a new members class, leftovers are not on the menu to be served. Given what I just said about how good they are, I'm not sure why we don't.

There is something inherently wrong about serving something to guests that has already had a spoon, a fork, or a knife, scooped, poked, or sliced through it. I believe it has to do with offering the best to your guests; honoring them with the untouched.

Confession: I was reminded of this this last week with a few of my parishioners. I love them as my sheep but I get a bit perturbed at the excuses for not coming on Sunday for worship. "Well, I watch on line, pastor?" "Well, I had such a busy Saturday..." "Well, I didn't feel very well" (accept they were out and about all afternoon that day). "Well, pastor at my age it's a bit difficult to get up that early (of course they have no problem staying up until two or three in the morning watching movies). Divine leftovers. I realize there are legitimate reasons and grace does abound. I'm not criticizing legitimate issues for community absence. But we shouldn't offer God leftovers. We offer our best and that includes our time.

A pastor went out to visit an old farmer at his farm. The pastor went right to the heart of the matter. "Bill, why don't you come to church on Sunday?" "I have meat in the freezer," Bill replied. "What in the world does that have to do with the topic at hand?" the pastor shot back. "Well, I figured it was just as good as an excuse as any other," Bill answered. At least he was honest.

Worship, in community, is not an option, it is an expectation and an expectation that should be gladly anticipated. "I was glad when they said to me, 'Let us go into the house of the LORD.'" (Psalm 122:1)

As we entered into the formal Advent season last Sunday, we should be looking to give God our best and not our left-overs. It's a busy time of the year with all the gift shopping and decorating. Unfortunately, a prime opportunity to offer God our seconds.

I am a bit embarrassed to admit this, but the Christmas season is exhausting and I can't wait for it to be over. I'm running on fumes by the end of the year and often giving God my left-overs. 'Tis the season and I haven't been able to correct it in twenty-five years of ministry. Except one year that we moved to another church assignment and came in too late to prepare for anything. We ended up going to another church's Christmas Eve service where we could observe other people being exhausted. We didn't care for that service either but at least we weren't stressed over the planning and execution.

The early church didn't celebrate Christmas. Outside of the fact that we really don't know when Jesus was born (probably September/October) and that it was associated with Saturnalia, the worship of the Roman Sun god, we have no scriptural mandate to celebrate it. But we do - right or wrong. Redeeming paganism. Perpetuating traditionalism. Supporting capitalism. Good Christians.

I'm just praying that by the time this season closes its doors and steps into the new year, we're not still offering leftovers to a God who deserves so much more...than crusty creamed corn...no matter how good it tastes.