"We know that the whole creation has been groaning as in the pains of childbirth right up to this present time." Romans 8:22 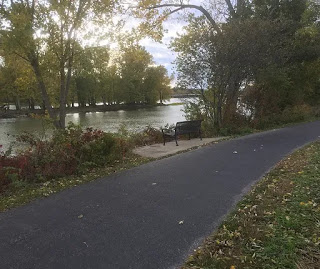 The trail was named after a Miami Indian chief by the same name (Little Turtle) who was an advocate for peace with the many European settlers making their way to the expansive west. It's hard to believe that Indiana was once thought to be the untamed frontier but as I said in a past blog...give it a few years without tending and "Mother Nature" will reclaim what has been tamed.

Deb and I were walking this trail Sunday afternoon - glad for the respite of high humidity days that consumed us for the last week or so. We came to a particular clearing and we noticed all the dead leaves on the trail. It took us a bit by surprise since Fall is technically a few months away. Perhaps it is coming early this year. I've noticed the subtle color change and dropping of leaves from my Red River Birches in the backyard as well.

No worries. It's just stress. When trees are exposed to such hot days without rain they begin to get rid of things, like leaves, for self-preservation - anything to save the tree itself. Stressed trees. Who would have thought.

Nature is a great teacher if only we would be good students. As long as we live in this broken world their will be stress. Jesus said, "In this world you will have tribulation" and with that tribulation comes inevitable stress.

The tree is smart enough to shed that which it can survive without. If only we had such wisdom. Instead, we cling to the thing that brings about the agony not realizing that it is not essential. We cling in order to retain that which we think we need, but in the end puts greater stress on the trunk. In many cases we know its not even a need but a want that makes life a bit more enjoyable. And yet we cling.

Like the earth in general we groan, realizing in the depths of our being that something is not right -externally or internally. The earth is waiting for us to be what we have been created to be - fully redeemed by the coming of our Lord. Only then will she rejoice. Only then will she de-stress as well as us.

Until then...look for more dead leaves and bewildered walkers.