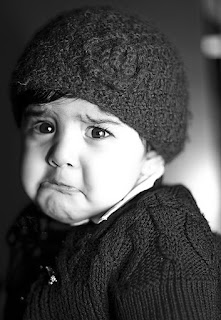 I grew up like any other farm kid - working hard, playing hard. Many a time I used to stay overnight at my cousin's house which was right down from the farm. We used to play Stratego or Battleship or some war game together after supper. Amazing in itself, because we also beat each other up during the day until one of us would cry.

"You big cry baby!" usually came after one of us was made to eat dirt or had a small, metal, farm implement thrown at our heads resulting in a trip to the medicine cabinet. You learned not to cry. You stuff that cry baby stuff in and be tough. Masculine trauma. Boys becoming men. Unfortunately. For me...unsuccessful. "A tender shoot coming up from the ground..."

As I get older it only gets worse. My grandchildren love to watch Disney films not for the movie but to watch my uncontained blubbering. "You mean Bambie's mom wasn't captured and taken to a zoo where later on she was reunited with her son? You mean she was..." "But why would they separate Dumbo from his mother? That is so cruel." As Deb would say, "Moms and their boys. What is up with that?" Hardened woman.

I have once again been reminded of the emotion of loss this past week. No...no one has died. Perhaps the better word is "lost." Watching college senior athletes weep as they go off the basketball court. Towel over their head. It's just a stupid game, right? Watching the Spring Baking Championship with my bride. "The baker going home is..." It's a stupid baking competition, right? Tears. From them and...from me.

I turned to Deb and said, "Isn't it amazing that even as adults we cry when we lose. It's a game. It's a contest. It's a reflection - warranted or not. But the wonderful thing is that we cry with them. We sense their desire to play well, to bake well, to be the best, and when that doesn't happen there is a unity of empathy that comes over us all. Their loss is our loss. Their hurt is our hurt. A collective recognition that we could have done more, we could have done better. A group confession of "We all fall short of the glory of God...and of man."

On the path to Palm Sunday, Jesus wept. For the baker going home is..." No. That can't be right. Crying.